A'therys Ascended is a Minecraft server. But not just any server. It's one of the few servers in existence where building, PvP, PvE, and roleplay coexist. It has its own resource pack, which makes the players' magnificent creations look a thousand times better.

The server's custom map is known simply as A'therys. It is huge (21,000 by 14,000 blocks) and contains six nations, each with its own colorful backstory:

Alternatively, there are many independent guilds, including Steryon, the dreaded pirate stronghold, and Cyridon Spire, home of the prestigious Arcane College.

Feel free to ask any questions you may have on the A'therys forums. 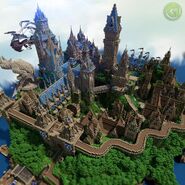 Add a photo to this gallery
Retrieved from "https://atherys.fandom.com/wiki/Atherys_Wikia?oldid=5127"
Community content is available under CC-BY-SA unless otherwise noted.